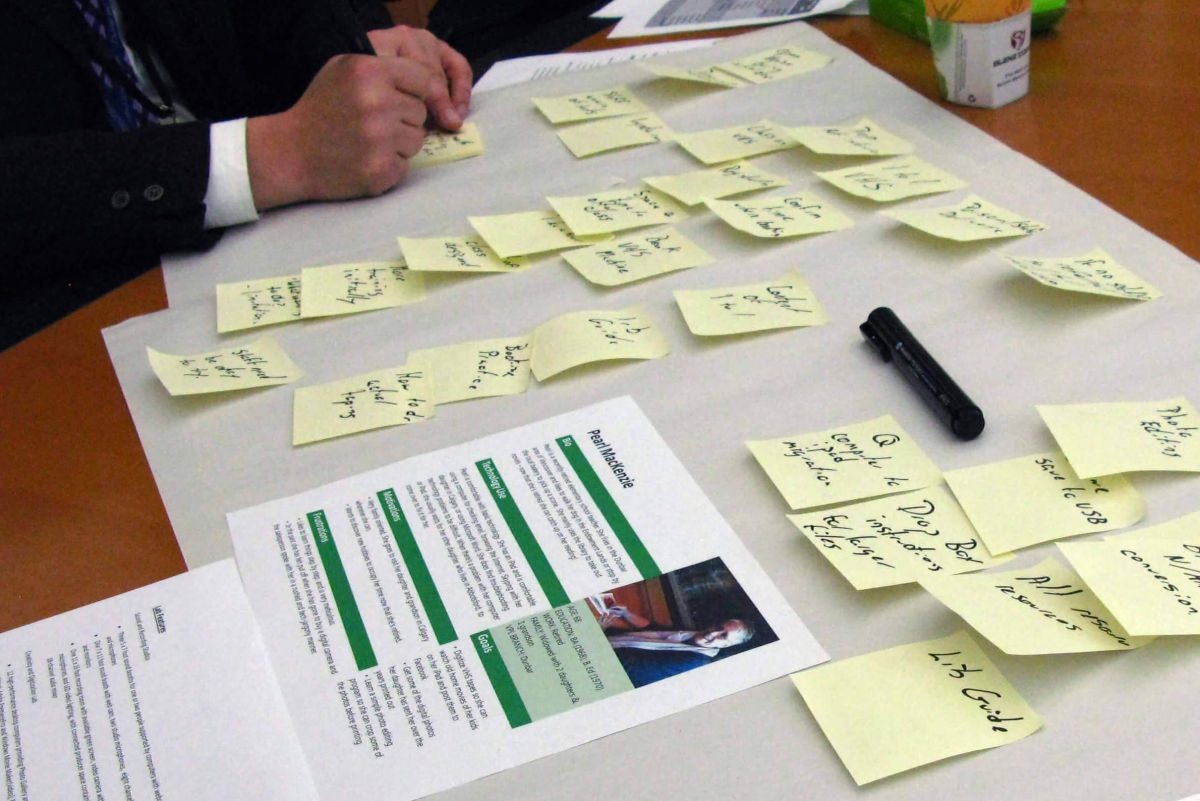 In 2015, the Vancouver Public Library was preparing to open the Inspiration Lab, a digital media lab that offers library users free access to sound and video studios, analog-to-digital conversion tools, and audio, video and graphic software. The Lab was a brand-new kind of service offering for VPL. Everything – including equipment, booking software, service model, staff training – needed to be figured out before the Lab opened in May 2015.

I became involved with the project in December 2014, when I saw that many planning committees were working on aspects of the Lab, but no one was thinking about what the service would look like as a whole. I proposed a series of service blueprint workshops to get staff thinking concretely about what using the Inspiration Lab would be like from a user’s perspective.

Unfortunately, there wasn’t any user research to work from, and time and resources were extremely limited. Working within very tight timelines, I designed and delivered two workshops where staff could 1) identify the most common user scenarios and 2) map out the ones that worried them most. I made sure that each workshop involved a mixture of staff from different departments and job classifications to bring a variety of perspectives to the table.

I took time at the beginning of each workshop to give a brief overview of service design principles. Then I broke them into groups and gave them a persona and a task/goal-based user scenario. I asked them to plot the steps that persona would take in accomplishing their goals. Once the journey was mapped, I asked them to identify the different touchpoints where these steps might happen. I then had them figure out what needed to happen behind the scenes to support them. Example of a service blueprint, created in PowerPoint, used to explain service design to staff. I chose to examine e-book help, a process most staff would be familiar with. While the blueprint isn’t as nice-looking as one made in Illustrator, it provided a template for other staff could use.

While service design was introduced late in the planning, and user research wasn’t possible, the workshops were still a worthwhile exercise. Staff found the workshops to be a fun and valuable process. We co-created blueprints for sixteen scenarios and identified some gaps where micro-procedures needed to be designed. More importantly, the sessions generated discussion and allowed more staff to provide feedback on the plans-in-progress.

Soon after the workshops, I moved to a full-time position in a different department. I handed over notes, draft blueprints, and templates to another staff member, who created digital versions of the blueprints and made a to-do list for the Lab’s opening. The process revealed gaps in current planning (e.g. “the Lab is open until 9 PM, but there’s no IT staff available after 6 PM”) and allowed us to develop ways to handle contingencies.